Update, April 25, 2012: I know I haven't been updating this website too often. It was because I became unsure if anyone is interested in itself, if anyone would like to see something of hungarian general aviation, museums and air shows. I'm still not sure about it, I did however upload a new page about a visit to the Szolnok military aviation museum in last May. I hope you'll like it!

I have been devoted to flying ever since I was a little boy. I think I inherited this: my father wanted to be a jet fighter pilot when he was young, but unfortunately he didn't suited the requirements. I believe that must have been a shock for him, as he loved airplanes, and he wanted to fly just like his father (my grandfather), who used to fly sailplanes before WW2. Grandpa gave up flying in the '50s, but the love of the open air stayed in our blood - in my father's veins and in mine...

For a long time my only airborne experience was a flight with a Tupolew Tu-154 (a soviet jet airliner, registration: HA-LCP) I won on a drawing contest. I have read all books that were available at the time in Hungary, so I thought I knew everything about the plane, and I would have been happy even if we did not take off. But we did and the following one hour changed my life - I realised that flying was great indeed! After that, I went back to my books and the air shows and dreamed of being a pilot. Even my first novel that I wrote for myself at the age of 14  told a story about pilots :-) Unfortunately again, flying in Hungary was still so strictly regulated around the early '90s (when I got to the age at which I could have been allowed to fly) that I was told to forget about becoming a pilot because of my state of health (especially my eyesight), so I stayed at watching the planes from the ground, visiting different airports and air shows.

It was at a military air show in 1998 when I realised that flying was missing from my life. At the time medical requirements were eased, so I might have been allowed to pilot a plane, but in the strange economic situation of this small country aviation became very expensive. And this still is the case - it's cheaper to go the US, attend an aviation school and get a PPL there, than to do a flying course here in Hungary! To make this short, I can only afford being a passenger... To bring a little comfort into this, I always try to fly different planes. And while at some airport, I photograph everything I can and I'm allowed to! There are many type of airplanes here in Hungary: the countries general aviation is a mixture of soviet, czech, polish and "western" technology! 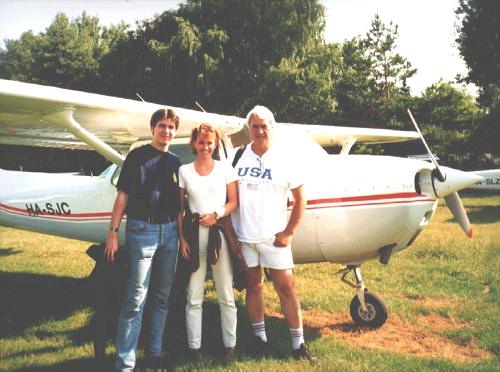 May, 1999: I discovered general aviation :-) I'm the one to the left; the guy on the right is a commercial pilot

This page is made in my free time: I do it for fun, and because it's good to see that people like it. I would probably update it more often if I had the time, but I have to earn my living, too. And it's not the easiest thing to do around here: I mean I'm okay and am even able to travel a little bit, but I always have to choose, which one is more important: to fly a little bit? to buy myself a new camera? to get a new computer? to buy my favorite music CD's? or going somewhere with my girlfirend? - I can't afford these things at the same time (maybe not even in the same year). So, if you liked my pages and you feel like it, I would be mostly honoured if you'd buy me something (even something tiny!*) off my amazon.co.uk Wish List!

*If you happen to be a millionaire searching for a way to make somebody (me!) happy, or you're Santa Claus, please feel free to buy me one of the more expensive things off this list ;-)

The small print:
The photos on these pages were taken and are owned by me unless stated otherwise. I you want to use some of them, drop me a line, and you will be allowed to do so - all I'm asking in return is usually just a link pointing to this site! Disclaimer: this site was not meant as an educational or industrial review site - the notes about the pictures are just my own personal thoughts or the comments of an amateur, never meant to be interpreted as either a tutorial or professional reading. Also, if you see incorrect information, typos or mistakes here, please notify me! Thank you!
Back to my main page...
or