Today's Fehérvári út - "the road leading to Székesfehérvár" - was a rustic land road that first received a track-bound transportation means in 1899, when the BBVV electric vicinal railway between Szent Gellért tér and Budafok was opened. This vicinal railway was first extended to Tétény (1909) and then also received a branch-line to Törökbálint via Kamaraerdő and Budaörs (1914) - the remains of latter is what we now know as tram 41. To the left: looking southwards in Fehérvári út around 1900. The the right: the terminus of the HÉV lines at Móricz Zsigmond körtér in the 1950s, with a tram 47 to the left.

The inner section of the road started to get built in the 1930's, giving the vicinity a more urban look. The rest to Építész utca was mostly occupied by factories, the rest remained bucolic. The vicinal company was bought by BKVT around 1911, and operation was transferred to its subsidiary BHÉV. The strict boundary between trams and vicinal trains started to dissappear slowly: first there were tram shuttle services between Móricz Zsigmond körtér and Albertfalva kitérő (like route 47 in 1953) and Remise Budafok/Forgalmi utca (route  47 in 1953, route 4 in 1959). Trams and HÉV cars used the same tracks in Fehérvári út during these years, making the HÉV trains slower due to the lower voltage level meant for trams (500V instead of 1000V). 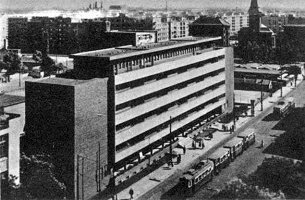 The "green trains" in Fehérvári út: HÉV arriving to Móricz Zsigmond körtér (to the left), and in front of the still existing public healthcare institution SZTK (to the right)

From the 1st of January 1963, HÉV operation in Fehérvári út was abandoned: the vicinal line to Tétény was called tram 43 from then on, the truncated Törökbálint service, now running to Budaörs only was tram 41. Tram 4, which has been running to Budafok, Városház tér since 1962, was replaced by tram 47 in 1972, and at the same time tram 9 was extended from Albertfalva kitérő to Budafok, Városház tér, while Albertfalva kitérő was occupied from then on by tram 18. Tram 43 was shortened in 1972 and abandoned in 1983, 9 was suspended in 1986, while tram 18 was extended to Savoya park on a newly built stretch in 2005. Route 41 has also had quite a surging life with cutbacks, but then it was restored to Móricz Zsigmond körtér in 1993. Then it was to be cut back a bit, but instead of that senseless move, it was extended to Batthyány tér in 2003.

I know all these changes are hard to follow, but I think it gives you a clue how vital a tram corridor this is for South-Buda.

The tracks, formerly laying on the two sides of the road, were put into the middle of the street in the seventies, and from around that time, the small-village-like (and sometimes outright rustic) garden houses of Albertfalva (the quarter between Andor utca and Budafok) gave way to (ugly) high-rise housing areas.

Remark: On this page you will see lots of pictures of UVs. These classic 4-axle tramcars were withdrawn in August 2007, but I'll use these pictures here, because I think the street simply looked better with them :)

We start our way southwards by leaving Móricz Zsigmond körtér. On the short stretch between körtér and the next stop, Bocskai út, you will find a third track in the middle, and in the mouth of Bocskai út a connecting track leading to the terminus of route 4:

The reserve terminus in Fehérvári út

Route 41 in its ill-conceived and short-lived terminus, and the celebration triple-set of the "last UV day" waiting on the same track.

Now there's an odd story: they've built an extra track in the middle of Fehérvári út to replace the old terminus of route 41 at Móricz Zsigmond körtér in 2003. The fact that this new terminus was more than 150 meters away from its original location did not seem to cause trouble in the minds of its half-hearted designers. Fortunately many people disliked the idea of a terminus located halfway between Móricz Zsigmond körtér and the terminus of route 4, so route 41 was extended northwards to Batthyány tér instead of the shortening. This terminus is now used only during temporary shortenings and detours, and it's also the place for putting broken-down vehicles aside - or for chartered rides to have a break.

Hint: near this place you will find a modern market hall, which in fact is a larger building built above an older, pyramid-like marketplace. Here you can eat something or have some refreshment.

The stop Újbuda-központ has a middle platform featuring stairs to the subway which will once house the M4 metro station.

It's not easy to get a got shot of the trams stopping here (left, taken of a heritage vehicle during 2013's Tramway Day), nor of anything using the connecting track (right).

The next stretch has a semi-private right-of-way, so you can take photos from the stops without getting too much vehicular traffic between the lens of your camera and the trams.

This used to be just a stop along the way, but in conjunction with the extension of route 1 the stop was converted into one with an island platform on one side of the junction...

... and a two-track connection to route 1 was built on the other side. These tracks are not used by scheduled traffic.

Around the stop Kalotaszeg utca, only one side of the street is occupied by those ugly high-rise apartment houses, so if you're photographing the other side, the place looks quite neat.

Heading further to south, seen near the stop Andor utca.

... which is an intermediate terminus, not used regularily anymore.


Until recently this was the southern terminus of route 18, and then 118. Not only the middle track is interesting, but also how the through tracks switch to the side of the street from the middle lane.

I guess this is how they imagined the future in 1970 - although this is by far not the worst kind of such housing "plants"!

To the left: a Tatra after the stop Albertfalva utca. To the right: tram 47 in the Fonyód utca stop.

To the right: the grey metal box on the right of the picture dates from around 1920. I wonder how it managed to remain there!

This tram depot was built for BBVV around 1899. The whole yard is open from the street, there are no fences, but don't let this fool you: one is not allowed to just walk in; you need a written permit from the BKV to enter the remise!

These photos were taken in 2001, when UVs still ruled the place. Now it's Tatra territory.

Here's a link to a track layout map of remise Budafok, also showing the now abandoned siding to the other side of Fehérvári út. This used to lead to the own power plant of the BBVV (which of course was abandoned long ago, but the siding remained). The depot also has a track connection to the state railways line behind the place. On the map you can also observe a reversing triangle: this was last used regularily by route 41 in 1993, as the last such terminus in Budapest (reversing loops, simple or scissors crossovers were and are much more common). Since then it's used only by special rides.

After the remise the tracks start to rise on a ramp, providing a nice view into the depot. On the photo on the left you can see a Ganz articulated tram standing next to the "live" tracks: that's how the now-abandoned rush-hour service 41A reversed.

Remark: the complete remodelling of the depot (with just one or two really old buildins remaining) is planned in 2015/16.

And now comes a double turnout combined with two railway flyover bridges - a construction I think well worth the boring ride via Fehérvári út:

On the map above, we're coming from the right-hand side. First we have the turnout of route 18 to Savoya park. This is a downward ramp, while the straight direction (route 41 and 47) climbs further upwards. Route 18 then crosses the tracks of route 41 and 47 in a subway, while those enter a flyover bridge, passing over two state railways (MÁV) lines. And that's not the end yet: as soon as they leave the flyover, there's another turnout: route 47 turns "left", route 41 turns "right".

The stretch to Savoya park

... and then passes under those routes in a spacious underpass. Note: it's dangerous to walk on the tracks - these photos were taken during the technical acceptance test runs. Trams go down this ramp and through the underpass surprisingly fast, so plase stay away from the tracks!

To date this is the newest stretch of tram in Budapest used in revenue traffic.

UVs were not common here, but I couldn't resist to insert a few photos of them to here, too :)

The terminus is a typical scissors crossover. Although it looks like the line could be extended, but there are no plans for this.

Remark: Route 47 was suspended for quite a while recently. It was substituted by route 56, therefore you will see Tatras with route number 56 on some photos on this page, instead of Ganz artics bearing the route number 47.

These are again exceptional photos: it's not allowed to walk on this bridge, but the tram on the left-hand side broke down, and passengers were asked to walk their way to the next stop here. And while we were walking, I took a few photos :)

As I mentioned, trams pass over two different railway lines here (okay, substantially they are running parallel for kilometers, but once they belonged to two different railway companies, so they are still regarded separately). One of the bridges is a steel construction, the other is an old steel-concrete one, which was renovated recently.

And here comes the old HÉV turnout, where the line to Törökbálint (now tram 41 to Kamaraerdő) diverged from the one to Tétény  (now  tram 47 to Budafok, Városház tér).

-> Further along route 41 to Kamaraerdő

Now comes another stretch where the old neighbourhoods of the small-town Budafok (formerly known as Promontor) were torn down and replaced with high-rise houses.

At least they've kept the tram - and that with a private right-of-way!

The stop Savoyai Jenő tér is a bit peculiar: similarily to the stop Vigadó tér of route 2, one direction lacks a platform aisle, therefore passengers must alight to the tracks of the other direction.

From here a few hundred meters of old Budafok was spared. Unfortunately that's not a big appeal to the eye :-/ And as you can see on the photo to the right, the row of high-rise buildings continues in the distance.

Between 1972 and 83 Budafok, Városház tér (then known as Varga Jenő tér) was the outer terminus of inner-city (9 and 47) tramlines, and the inner terminus of route 43, running further to south.

Two photos of the last days of UV operation - the decorated triple-set was the very last UV in scheduled traffic.

Until 1983 route 9 and 47 terminated at the scissors crossover before (north of) the current terminus, and 43 started from south of them, as seen on the archive photo below - only that then there were two tracks leading that way, and not just one, as now:

Now the scissors crossover is out of usage (although very rarely it sees some operation, but it's in a very bad condition), so trams reverse on the single stub track which remained of route 43 - I think it's easy to see the space for the missing other track. At some spots (right) it even comes to surface!

And this is the end of the line, we're as south as trams can go in Buda. There are plans to extend the line one stop southwards (on the truncated, but still existing right-of-way we can see on the photos above), but as always with Budapest, there's no guarantee that this will happen :(

Back to the clickable map

Disclaimer: The author cannot be held responsible for mistakes, misinterpretations, inaccuracies, inactualities, etc. on/of these pages, nor for the content of other pages linked in.
Archive photos: from the collection of Zoltán Ádám Németh + Tim Boric