The Danube embankment branch on the Buda side: route 19 and 41

This is one of the nicest streches in Budapest. It consists of various sections built at different times. Its northernmost part was opened in 1869 as the first horse-tram line in Buda (Buda, Pest and Óbuda have been merged into Budapest in 1873), starting at the bridgehead of the first permanent bridge between Buda and Pest, the Chain Bridge (or Széchenyi Lánchíd, as it was later named after the initiator of its construction). The horse tram line went along the Danube to Bem József tér, from there it went over to what later got known as the Buda section of the Grand Boulevard, and then climbed up to Zugliget, as the predecessor of "lost" tram route 58. Another branch went further to north, and was mainly the predecessor of today's tram 17. Later it was electrified, but it was only connected to the tram lines on the southern side of the bridgehead in 1906.

The section north of Battyhány tér was abandoned in 1970. Around that time the strech between Döbrentei tér and Batthyány tér was used by route 9, and later by route 19. Tram 9 was suspended in 1986, while route 41 was brought here in 2003. The section between Batthyány tér and Margit híd budai hídfő was rebuilt from scratch in 2014-15; one of the problems of the construction work was the tunnel of the HÉV (suburban railway) to Szentendre under the street surface that was built after the trams were done away.

Here's a Google Maps overview of this branch. It's right on the left-hand side (as we look at it here) of the river:

The upper quay (the street above the quay) is called Bem rakpart after Polish general and Hungarian national hero Józef Bem.

After the short stretch of gauntleted (overlapped) tracks under the bridge (left) the tracks continue on the eastern side of the road (right).

The sole stop on the newly built stretch is at Bem József tér, where we have a bit of a view at the House of Parlament on the other side of the Danube (left). These photos were taken on the line's first day of operation which was a bit gloomy - it looks nicer in reality :)

The trees between the esplanade and the tracks vanish as we arrive to...

Batthyány tér was the terminus of the Buda upper quay tram lines for more than 40 years, now it's just a stop where you can change for the metro. The panorama is still the same, though.

The St. Anne Church with the Market Hall (left). To the right: a part of the Castle District with the Mathias Church, the Fisherman's Bastion and the Hilton Budapest opened in 1976.

This is a "touristic" part of the city, with many attractions. You should take a look at it from the other side of the Danube: there's the Castle District above, with the Fisherman's Bastion, the Mathias Church, and the Battyhány tér Market Hall below. And there's the old White Cross Inn, in which Casanova has stayed for a few nights during one of his journeys - at least according to folklore.

Hint: The inner terminus of the HÉV (suburban railway) line to Szentendre is located under the square. This is the line which takes you to the Urban Transit Museum in Szentendre.

Here you will find a few hotels, brasseries, and the French Institute (Institut Français).

Some of the houses in the street are now getting renovated, but most of the trees had had to be cut after a catastrophic storm in which two people died from falling branches. It turned out the trees were suffering from some kind of disease that made them too weak to withstand the strong wind. A tram stop was originally located here, but was moved to south of the bridge a few years ago.

The underpass under the bridgehead of the Széchenyi Lánchíd is narrow, steep and windy - so definately a must for tram fans! :) This used to be more fun with UVs (left), but at least it was renovated in 2014-15:

The renovation was long overdue because the tunnel was too narrow for modern trams - even the Ganz artics had had to pull in their rear view mirrors. Now it can be used by all types.

Let's climb out on the other side:

A bit of modernity in front of some 19th century art& technology relics like the palace from 1867 (to the left) and the Chain Bridge opened in 1849 (to the right).

The stop for Clark Ádám tér/Lánchíd is located after the tram climbs out of the underpass. There's a crossover switch after the stop, used only during shortenings.


Hint: The easiest way to get to the Castle District is to alight here and take the funicular.

Here the views are dominated by the Chain Bridge, and the Castle Garden Bazaar (Várkert Bazár), which was renovated in 2013/14 after decades of neglection: 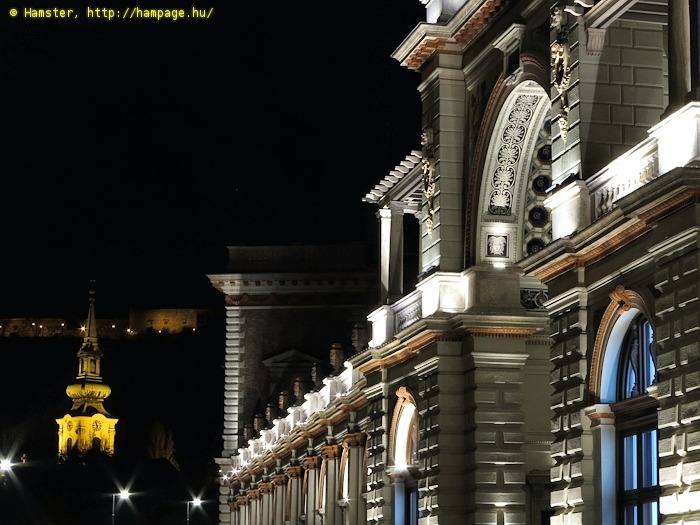 The Bazaar nicely lends itself as a vantage point for taking wide-angle photos:

The stop Döbrentei tér was originally a few hundred meters away from named square.

In 2015 it was moved towards the freshly renovated Castle Garden Bazaar, and a new stop was built at Rudas fürdő, just below the Elisabeth Bridge.

Route 56/56A is joining us here as it arrives from Déli pályaudvar (these are of course older photos, but the basic geometry of the junction hasn't changed).

Trams are running here in the middle of the narrow road between the river and the cliffs of Gellért-hegy (St. Gellert's Hill).

To the left: the Szabadság híd in the back, to the right: the Rudas Spa, with its turkish bath built during the ottoman occupation in the 16th century. The new stop is located almost under the bridge.

A new stop was build at Rudas fürdő in 2014, as an interchange between the tram and bus lines.

Looking north, with the Elisabeth Bridge in the background

After a few hundred meters under the rocks, we arrive to...

Buda's most important tram services run through here, which means one tram in each direction at every change of the traffic lights - this will sure give you plenty of possibilities to take tram photos!

Left: Szabadság híd on a hazy morning. In the middle: Tram 49 before turning onto the bridge. To the right: the tram stop on a rainy night.

-> Over to Szabadság híd and the Small Boulevard

The tram stop in winter, still with UVs

One thing: please be cautious with vehicular traffic when searching for the right angle for a photo! And also be cautious in the stop: the platform is quite narrow for such a big patronage.

Hint: You should climb up to Gellért-hegy - there are a number of panorama platforms on the cliffs, with a first-class view onto the trams!
Hint: This is not an advertisment, but the Gellért Spa is really an attraction. It's approachable from the side of Hotel Gellert, and is so spectacular that it was even featured in some movies (like in "I, spy" with Eddie Murphy).